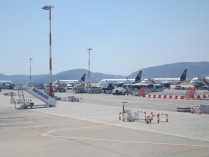 After a few days in Athens, I headed to the airport to meet my friends who would be attending my friend M’s wedding in Crete with me.  Some, like my travel companion for the next couple of weeks A, I’d known for years; others would become friends by the end of the trip.  We were all scheduled to be on the same Aegean Air flight from Athens to Heraklion, where we would split up into smaller groups to share cabs or rental cars to the resort where the wedding would be held.  I don’t live super close to the bride & groom, so I was meeting a lot of the other wedding guests for the first time.  What better a way to get to know new friends than to take a trip together!

White Party at the Sailing Bar

We arrived the day before the rehearsal dinner, and spent the first night getting to know each other and greeting old friends as one by one they arrived and wound up at the White Party the hotel was throwing at their main bar.  Of course, the hotel staff didn’t tell all of us about the white party, so I showed up in a fabulous BLACK dress! Oh well, I like to be different! 🙂  It was a great night of drinking, dancing, and either catching up with old or getting to know new friends.

View on the water

The beauty of a destination wedding at a place like this is the relaxed pace.  With most people arriving 2 days before the wedding itself, there was no rushing to do anything.  The next morning, everyone wandered out to a beach or pool and spent their day doing whatever they wanted.  A and I headed over to the beach, where we relaxed and read.  We found the bride & groom, and one by one I met the members of the bridal party on the groom’s side and their dates.  Being a friend of the bride’s first, I already knew most of the bride’s side of the party.  We all had drinks in our beach chairs, until the bridal party went off for the rehearsal.  Those of us not in the wedding party continued to relax and take it easy.  After dinner in the restaurant, we went and met up with them after the rehearsal at this great little bar on the water.  Everyone swapped stories about the bride & groom and a good time was had by all. 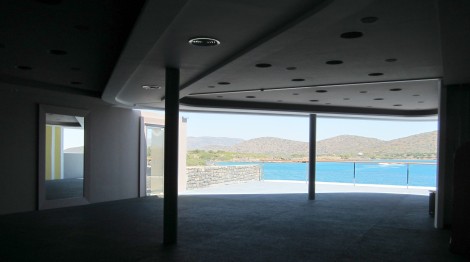 A wonderful place to practice yoga

M’s view from her wedding suite while she got ready…. yes that’s a private pool for the room!

The next morning, it was the big day!  Another plus to a destination wedding is that I was amazed at how laid back the bride was on the morning of her big day!  Now, I’ve been in 4 or 5 wedding parties, and attended many others, and M was more relaxed than most brides I’ve dealt with!  She was soon off to get herself ready, while some of us guests continued to enjoy the resort.  At one point, a few of us met up at the group fitness room for a bit of quiet reflection and yoga.  The hotel’s fitness room was an ideal place to practice, with the room open on one side to the sea and mountains, bringing in a natural calm and peace to the session.  I dedicated my practice to the happy couple and the joy that their marriage would bring them. 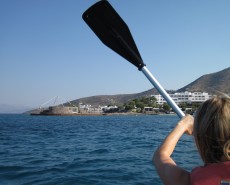 Kayaking towards the Elounda Beach Resort

For another non-wedding activity at the Elounda Bay, I spent an afternoon with another friend I was getting to know better on this trip.  She and I went to the equipment rental office and rented a double kayak to take out onto the water.  E had never kayaked before, so we figured it would be a great way to get some exercise while she tried something new!  And I always find kayaking very relaxing, so it seemed like a perfect way to get mentally ready to celebrate our friends’ union…. maybe balance out the collective stress level of the group! (Though it should be noted that the bride, M, was far from the Bridezilla stereotype everyone thinks of!  In fact, I found her even calmer on her wedding day than she sometimes was for regular nights out on the town when we were younger!)

As for the wedding itself, it was outdoors and beautiful!!!  It was pretty hot, but under the canopy set up by the hotel, the guests were quite comfortable.  The bridesmaids were under a large umbrella, but boy did I feel badly for the groomsmen, standing in their suits largely in the blazing sun!!  M was the picture of the beautiful bride – truly magazine-ready.  The groom was beaming at her as she approached.  It was perfect.  Then came the Party!!  With cocktails & appetizers by the Sailing Bar before going to one of the hotel’s restaurants, Thalassa (which is a a seafood restaurant though, little known – or at least unknown to me before this wedding – fact: in Greek tradition, seafood is for funerals, so it wasn’t actually on the menu for this event) for the reception itself, things were off to a good start!  It was the traditional American wedding traditions – speeches, dancing with the parents, throwing the bouquet & garter; infused with some traditional Greek flavor, with traditional Greek dancing and Raki (a local liquor that packs a big punch! Popular in Greece and Turkey, Raki is a little different in the two countries.  For some information on Cretan Raki, click here!) playing a huge role.  Greeks like to do things big, so there were even fireworks part-way through the party!

The party went on into the late hours, and the Aegean glistening in the moonlight proved to be a big temptation to many guests….. you know it was a good reception when fully dressed bridesmaids and groomsmen (perhaps influenced by the Raki?) end up in the water!!  All in all, a wonderful wedding, a fantastic time with new & old friends, and great memory for the beautiful couple and all their guests!  What a perfect way to kick of a long, happy and loving marriage!!!

Lots of love to the bride and groom!
XOXO

One response to “An American-Cretan wedding extraordinaire!”