Starting the descent into Zanzibar Airport

I was glued to the window as my plane started to descend over Zanzibar, transfixed by the color of the water surrounding this beautiful island, and the fact that I could see down clear to the bottom from the air.  What a change from the Ngorongoro Crater, which I had just left!  In fact, our driver from our Ngorongoro Crater Safari dropped my friends back off in Arusha before dropping me off at Kilimanjaro Airport to fly down here, so where I wound up finishing that day seemed like a particularly sharp contrast! As the plane descended into the airport, I could see the dhows (traditional fishing boats) in the water, which was crystal clear.  You know it’s clean when you can see the sandy bottom through the water from the plane!! 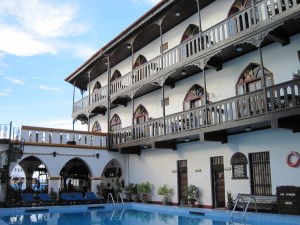 The center courtyard/pool at the Tembo House Hotel

I collected my bags, and went outside where I was met by K, the cab driver that was sent to pick me up by the people I would be working with that week.  He was a friendly guy, originally from Pemba Island, who spoke pretty good English, so I wound up using him any time I needed a taxi for my whole stay.  We drove from the airport to my hotel, the Tembo House Hotel (Tembo means Elephant), right on the shore of Stone Town.  I didn’t get too see too much along the way, as the hotel is not too far from the airport.  It was a quick drive, but, happily, I had arrived early enough that I would have time to do some exploring on this beautiful sunday afternoon.  I was happy to have the time, and the cooperative weather, to see a little bit of the area around my hotel that day, since I would be whisked off to work the following morning. 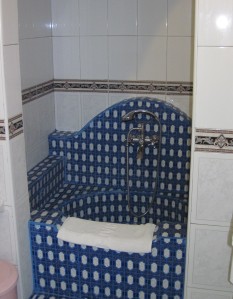 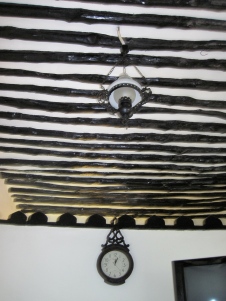 Beautiful beams across the ceilings in this historical hotel

The hotel was cute, and historically interesting.  The building dates back to 1834, when it served as an American Consulate.  I liked the initial room they put me in, that was beautifully decorated and had a really cool bathtub/shower.  Unfortunately, there was a very weak wireless internet signal on that side of the building, so I had to leave the room with the beautiful king sized bed and be moved to the other side of the hotel, where they put me into a smaller room with 2 twin beds but a nice balcony and nice strong internet schedule, which I really needed for work.  Ah, what I wouldn’t have given to just have been there on vacation and not needed that internet signal at all!  But then again, since it was a business trip, someone else was picking up the tab, so I can’t really complain!! 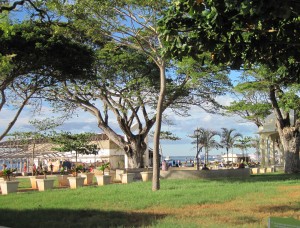 After checking in, moving rooms, and settling into my second room, I was ready to go explore my new surroundings in the middle of Stone Town.  Stone Town is named for the ornate buildings there, that were built mostly by Arabic traders there during the Slave trade era.  It is known for its narrow alleyways and the beautiful wooden doors that adorn the homes there.  The history of this town is controversial, to say the least, as it served as a major hub for trading, both for the spices that are available in abundance there and for slaves at the peak of the slave trade. 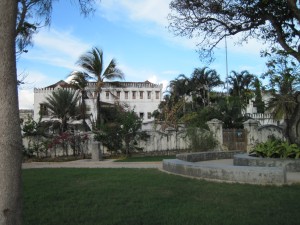 Across from Forodhani gardens

As I stepped outside of the hotel, every man I passed on the streets said “Jambo!” (hello!) and usually tried to get me to either take their taxi or buy whatever they were selling, but I just kept saying no thank you and continued to walk around, Lonely Planet: Tanzania guide in hand.  I passed by a few locations that I would visit later in the week, like Livingstone’s, a popular place with ex-pats that is right on the beach, Forodhani Gardens, and Mercury’s, a bar that’s named for one of Tanzania’s favorite sons: the late Freddie Mercury, of Queen fame. 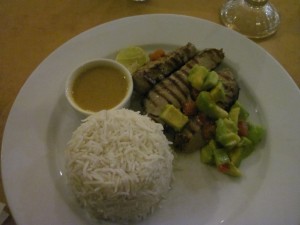 Some fresh fish with avocado & rice for dinner

Forodhani Gardens was crowded, but notably with much more men than women.  I didn’t notice many, if any, other women who were walking around by themselves, so after a while, I got a bit self-conscious and turned around to go back to the hotel as it started getting darker out.  I wasn’t yet brave enough to try the seafood being sold at stands at Forodhani Gardens, so instead, I found a restaurant nearby to grab a bite to eat, and had some fish for dinner before retiring for the night at my hotel.  I would do the rest of my exploration when accompanied by someone else!  Before I would go to bed, however, there was a knock on my door, and a girl came by to spray my room for mosquitoes.  She recommended going outside for 10 minutes, to let the spray settle, and I waited on the balcony while she sprayed down the room with this spray that reminded me of a very cheap men’s cologne.  But, not wanting to get bitten up by mosquitoes, I figured I’d deal with the smell!