OK, so this post is a bit over-due.  Sorry, I’m finding less time to blog as I’m back to my “regular” life back on the east coast, but I promise to make a better effort to continue to share my adventures!! 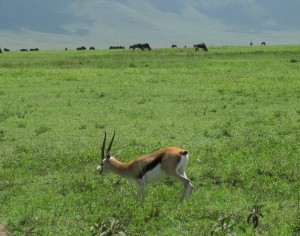 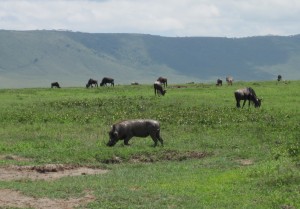 After seeing our first elephant of the day – a slightly dissatisfying experience due to the distance and the bushes that were obscuring most of our view – we continued on to see more animals.  Now I ask you, how jaded has a Jersey girl gotten when she sees “just another gazelle” or “oh, just another warthog”??  What can I say, the Ngorongoro has spoiled me!!  Once you’ve seen views like this, how can you ever go back? 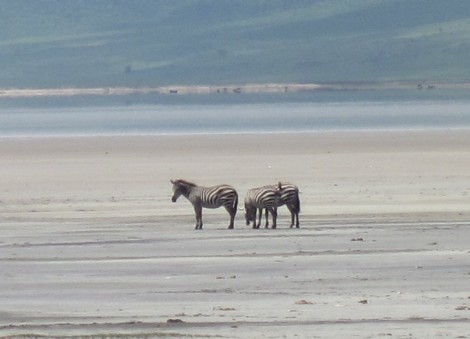 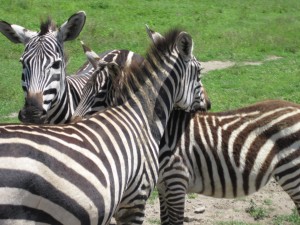 For whatever reason, I never got tired of watching the Zebras.  I loved watching them peacefully interact, and no matter how many I saw – or how indiscernible each was to the one before it, at least to my untrained eye, I just find these animals beautiful.  Watching them co-mingle with the Wildebeest, nuzzle one another affectionately, or raise their heads to keep an eye on a passing predator never got old.  Though I kept seeing one after another the whole day long, at no point did I tire of watching these gentle herbivores. 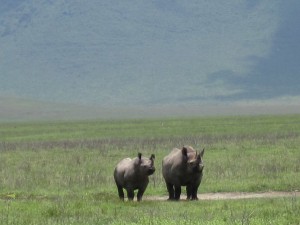 But still, we did move on to see other animals.  And am I ever glad we did!!  The next animals we encountered were much less graceful and elegant than the zebras.  The next animals we saw are, in fact, known for lacking grace.  The Rhinoceros.  These lumbering animals strolled along, not too far away from us but far enough not to feel threatened by us – which is good for us, as if they chose to charge us, man would we be in trouble!!  The Ngorongoro Crater’s richness in wildlife includes both black and white rhinos (distinguishable not just by color, but also by the size of their second horn, according to http://whozoo.org/), and we were fortunate enough to see both types!  Unfortunately, I didn’t get any pictures of the White Rhino that were in focus. 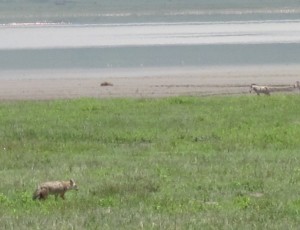 Jackal in the foreground, zebra in the background 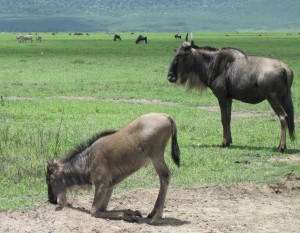 We continued to drive along, and saw a jackal next (which basically looks like a cross between a small dog and a fox) and then some more jackals before taking our lunch break, when we pulled over to eat our boxed lunches near a den of lions who we were hoping would do something interesting while we were sitting there.  Of course, the mid-day heat seemed to have lulled them into complacency, and the most interesting thing any of them did at any point was to roll over and yawn….. 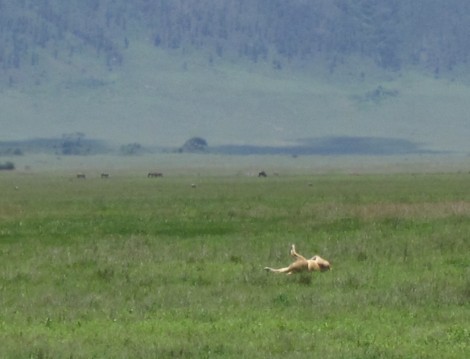 Lion rolling over during a nap 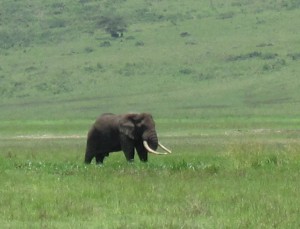 After patiently waiting for the lions to do anything at all while we ate, we finally gave up, but not before being rewarded by a slightly closer (though still fairly far away) view of an elephant, this time not obstructed by bushes.  We watched this magnificent creature stride around before us, and admired it from afar.  Satisfied that we had seen a lot of good stuff even though it was still midday, we decided soon after this that it was time to start heading out of the crater and back towards the hotel.  Our driver started heading back towards the entrance, and we found that we were just in time for a special treat: a cheetah.  So far, I had yet to lay eyes on a cheetah, and the big cats are some of my favorites – I haven’t seen a leopard yet, but I was lucky enough a few years ago to pet a cheetah at a rescue that was too used to humans to be released, so seeing one in the wild was a huge treat for me.  And we got to see the cheetah walking around, sitting, and laying down as a hyena passed close by, so it was very cool! 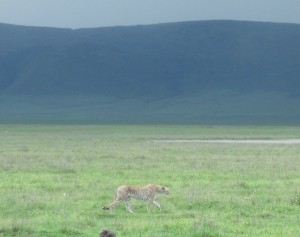 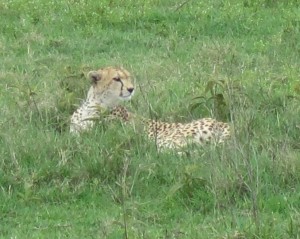 lying down, but still looking around 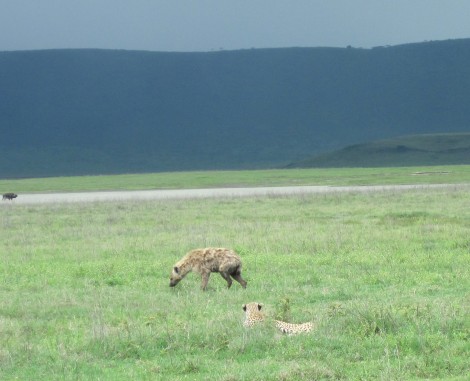 We weren’t the only ones watching this hyena!

The Cheetah.  What a beautiful creature.  After seeing him (not sure why, but I’m convinced he’s a him!), I was totally satisfied, and ready to head home.  We stopped a few more times before leaving the crater to look at some birds, some more zebra, and whatever, but really after the Cheetah, I was pretty much done.  I had seen what I wanted to see, and I was completely content with my safari experience!!

Or so I thought! 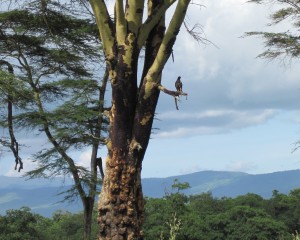 Eagle, looking out over the crater 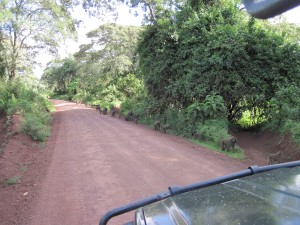 Just strollin’ along, past our truck

As we were driving back towards the main gates of the NCA, we saw a group of elephants way off in the distance, through the bushes, and discussed our disappointment at not having gotten closer or seen more of them.  But alas, we continued along.  We saw an eagle sitting in a tree along the road, and then a bunch of baboons walking along the side of the road – with their babies…. so cute!!  Our driver threw the car into reverse to get a closer look and we heard a squealing sound.  Being a regular gal from the more developed world, my mind instantly went to the sound a tire makes when rubbing against the curb during a slightly too close attempt to parallel park….. but it was definitely not the tire, and there was no curb!  We turned around and saw the source of the noise: 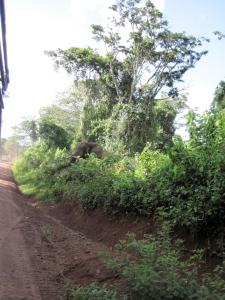 Look who’s right behind our truck! 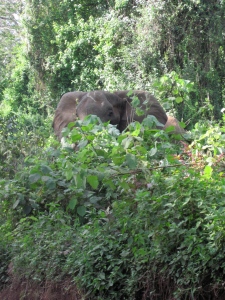 Staring right back at us and waving his ears

As we stared in wonder, the elephant stared right back and fanned out his ears, in what I now know is an aggressive display.  Our driver was worrying about the elephant charging our vehicle, as I spontaneously asked a really dumb question that proves that I’m not used to being around wild animals: can I get out to get a better picture?  Yeah….. my instincts aren’t so great due to my only experience with wild animals is pretty much Animal Planet!!  As the words came out of my mouth, I knew what the answer would be: NO!!  Not wise to get out of your safari vehicle around any wild animals.  I actually did know that, but got caught up in the excitement of the moment!  We watched as he looked back at us, and eventually crossed the road behind our vehicle.  So cool to be that close to such a huge animal!  And I think this one was still relatively young!  Still, what a rush.  After he left us in the road, staring at the bushes he disappeared into, we turned back to face forward as we drove back towards the hotel, looking at this group of cute baboons for a moment before heading back to the hotel for a nap before our evening’s entertainment. 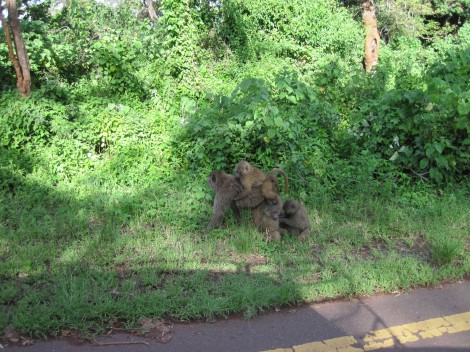 One response to “Animals of the Ngorongoro Crater, part 2”