I could get used to waking up to this view!!

On my first full day in the Serengeti, I decided to take it easy, much to the surprise of much of the hotel staff who kept (almost desperately) trying to convince me to go on a game drive.  As it is low season, I guess they really wanted to drum up as much business as they could.  But as I did a game drive for two hours upon arrival – straight from the tiny little Seronera Airport, on the way to the hotel – and I would be driving from Serengeti to Ngorongoro the next day, doing a game drive along the way, I really didn’t see the need to spend the day in a car.  So I opted to relax, read a book, swim in the pool, and go on a nature hike for my first full day in the Serengeti.

Travelling by yourself has some advantages and some disadvantages.  Advantage: you set your own schedule.  Advantage: you can fill that schedule with whatever pleases you, and aren’t forced to do anything you don’t want to do, just to please anyone else.  Disadvantage: eating alone does get a little old after a couple of meals….. especially when the staff make it even less interesting by seating your solo self down at the exact same table for each meal!  Advantage: this can prompt you to meet other people and make new friends.  Disadvantage: when you’re a woman, it’s harder to diplomatically get away from overly friendly male attention (whether it’s from staff, the guy selling necklaces on a beach, or just some guy trying to get you to go to a party at a club – which is a REALLY bad idea when you’re a woman travelling alone!) when you don’t have the excuse of someone waiting for you!  I used the – ‘oh, I have to go, I’m expecting a long distance phone call back in my room!’ excuse at least once or twice!  And once it interrupted my enjoyment of a beautiful sunset, but perhaps I’ll get to that story in a later post.  Now back to the story at hand.

I signed up for my nature walk, and when the guide came to meet me, I found I was the only one who had chosen this particular activity that day.  We waited for the park ranger, who would provide us with the necessary muscle…. or more accurately, firepower, for a walk in the wild Serengeti!  Apparently he’s only had to fire his weapon once in 12 years on one of these walks, and I was really hoping he wouldn’t have to shoot anything for me, but nonetheless, I felt better having him along!  As we started out on our walk, we stopped at a scenic overlook, where the hotel has built a nice stone terrace, and we came across two Indian couples, who were easily convinced to pay the $14/per person fee to join our fun adventure.  I was happy to have them along, as I felt slightly uncomfortable (though, in retrospect, perhaps its more surprising how slight my discomfort was) walking off into the woods with two guys, one of whom had a gun!

The now seven of us set off down the hill, with our guide stopping along the way to show us the variety of interesting plants including the Whistling Acacia,  Sausage Tree and Bushman’s Tea.  What I didn’t realize was that while our guide was telling us of the benefits of Bushman’s Tea (which apparently acts as a tsetse fly repellent when either applied to the skin or stewed and consumed as a beverage [hence the “tea” part!]) was that I know that plant by another name in Djibouti: khat.  Khat is a controlled substance, illegal in many countries, but legal in Djibouti, and commonly chewed in the afternoon.  It induces a euphoria that seems to lead to a lot of red-eyed people walking out in front of my car after lunchtime when I would drive around Djibouti!  I liked the smell of it, but I’m glad I didn’t chew it!!  Anyway, it was an interesting lesson in botany.  Another particularly interesting one was the whistling thorn acacia, which has these round little pods all over it (pictured left) that ants live in.  When our guide tapped the branch, tons of red little ants came running out of their little round homes.  It was an interesting phenomenon, though I wasn’t too eager to get too close to the ants, as I think they bite!  This bug apartment building plant is one I prefer to stay away from – especially since the thorns are pretty sharp too! 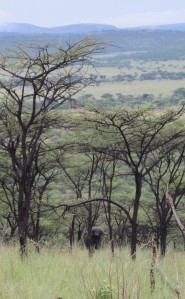 Anyway, we started to walk towards the small mountain (big hill?  For the sake of the bragging rights, I’ll call it a mountain!) next to the hotel’s property, to hike up to the top.  We started to go around the mountain, as we started the climb, and as we did something caught our eye.  Through the trees, there was a pair of eyes, staring back at us….. those eyes were attached to a very large head.  It was a Buffalo.  I started to snap some pictures, as he stared at us, not making any moves.  Then we noticed that he wasn’t alone.  To his left, was another buffalo.  Also staring at us.  As we checked one another out, we realized that the second buffalo had a big chunk of skin missing from his shoulder.  Our guide said that he had probably been attacked by a lion.  Suddenly, the two staring animals seemed less simply curious about us, and a bit more menacing.  The armed park ranger steered us back towards the way we came and we retreated to take another path up the mountain.  Buffalo are very dangerous animals, so backing away seemed like the smartest option!!  Besides, the guy with the gun told me to go a different way, so I quickly complied!! 🙂

Dik-dik having a snack

We started up another path up the mountain, hoping to see more wildlife, preferably less threatening wildlife!!  We saw a group (herd?) of Impala a short way in front of us – they’re so cute!!  There was the occasional Dik-dik, which is a small deer-like creature that I, at first, mistook for a baby Impala.  They really are very cute.  Even full-grown, they are still about the size of a small goat or sheep, so much smaller than the deer I grew up around, and got used to trying to avoid when I learned to drive!  We kept going up the mountain, trying to get the best view, and as we turned a corner, we realized that once again, we were being watched.  It was the same two buffalo….. now my sense of direction is pretty good, and I am pretty sure that we should have been out of view from where the buffalo

had started out, so it seems that they were following us….. very unnerving!!  But at least they were a little farther away from us this time.  We continued (a little more quickly, actually) up the mountain, until we reached the summit, finally out of view of prying eyes.  What a beautiful view!!  We could see many other buffalo from the top of the mountain – thankfully, much father away, and not staring us down.  Or at least, if they were, they were far enough that we couldn’t tell, as they just looked like black specks to me!  We went back down the other side of the mountain, back to the hotel, very much avoiding the threatening buffalo side of the mountain, and, sadly, so ended our nature walk.  I cleaned up, went to dinner a couple of hours later, and then got myself ready to go on a game drive to the Ngorongoro Crater the next day.